I have been commissioned to paint a mural for the new Public Library in Deshler in Nebraska.  The area I’m painting is a reading alcove for the kids, so I designed a fun, bright scene with a ‘storybook’ look to it.  The style for this library mural is different from my usual work, but so far it’s been a lot of fun!

Jun 17, 2016: The library is open!  The dedication was today and it was a great success!  I handed out coloring books to the kids – and you can download yours here.

Here is the original sketch:

And here is the space that it is going in.  There are two flat walls on either side with the curved alcove in the middle.

The first thing we had to do was smooth out some of the edges in the ‘curved’ wall.  I added a few layers of drywall mud to make these curves much less noticeable, the wall has 2 layers of primers and a final white base coat.  I’ll be assisted on this project by Jamie Luttrell and Art Whitton.

Art and Jamie put primer down so the mud would stick to the wall better:

Here’s a short time lapse of me climbing up and down ladders to fill in the corners:

March 30, 2016: Now with the wall prepped and the design approved, I started on the two canvas panels that go on the side walls.  Here is a gallery of images that show the progress.  I painted these in the studio as I wanted to take the time to define the style.

Here’s a short time lapse video that shows us installing the canvas panels:

Once the walls were prepped, the canvas panels installed and the paint was on site, we could start working on the main wall.  We start with the sky and put a lot of blue back on the wall – but it was the blue I wanted this time!  🙂

April 11, 2016: With sky blocked in enough, we could start on the lower background.  This was a little tougher than I thought it would be as the paint was reacting to the wall surface differently than the canvas.  It’s too be expected, really, but the techniques I used on the canvas didn’t work on the wall so blending the edge areas took a lot long than I thought it might!  Still, “it’s just paint”, so it will look great in the end.

As this shot shows, I still have more work to do on the blending!  😀

April 13, 2016: With the background on the curved wall almost complete, we could start adding some more characters.  Jamie added the skunk and blocked in the little birds.  I’ll have the kids from my weekly art class paint the birds!

April 15, 2016: Wow, look at all of that color happening!
The Skunk found a flower and the Fox joined the group. Also the Tree is wrapped around now.

The Ducks have arrived and grass is growing on the path.

The scene comes alive as more characters show up for Story Time! 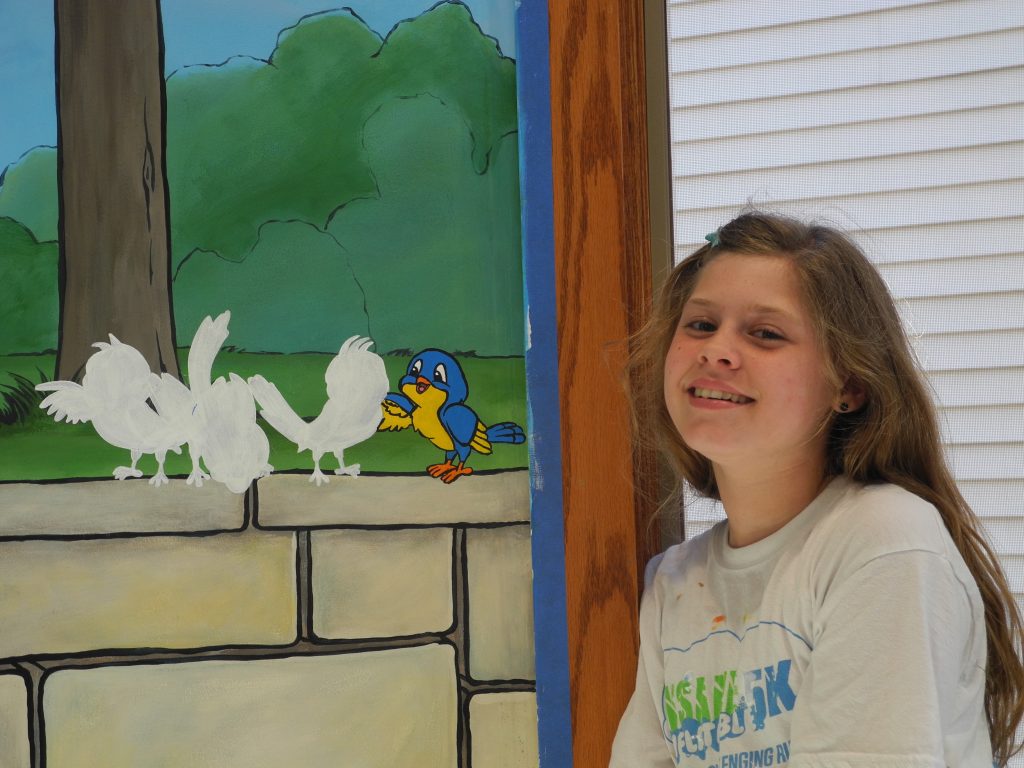 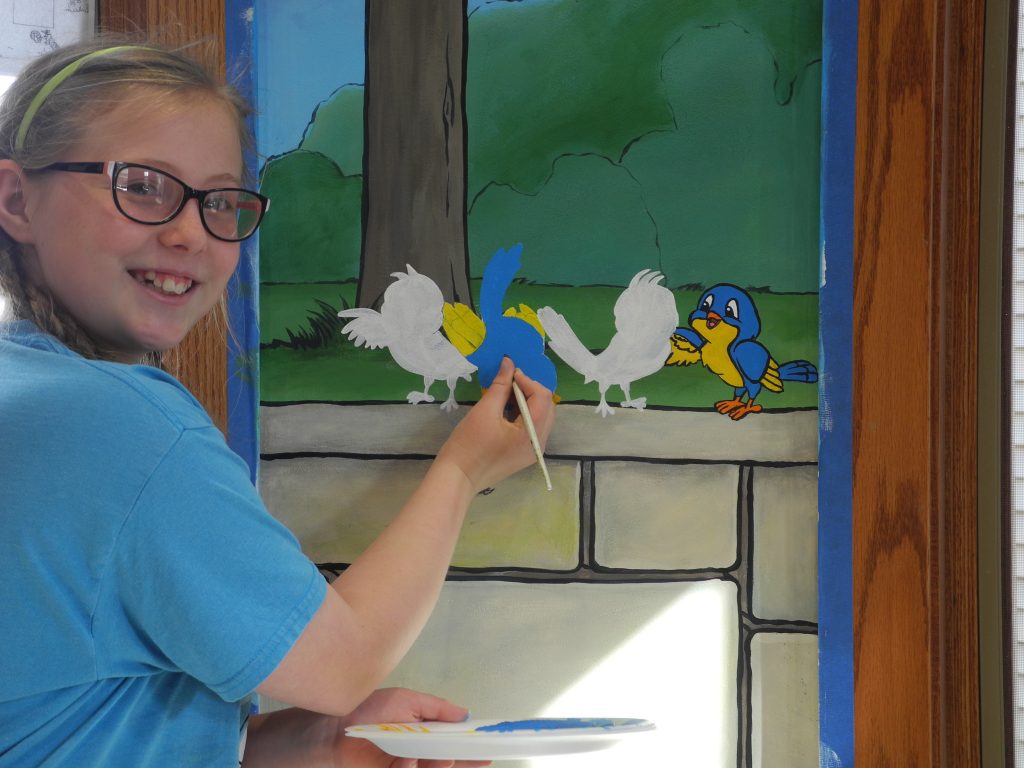 Dayci painted Phil the Blue Bird and Ella has painted Bob, the Blue Bird. Next week my other 3 Art Students will paint theirs…

April 18, 2016: With more of the background blended in, I’ve started to block in the last character – the unicorn!

And now more of the wall is coming together and there’s light at the end of the tunnel! 😀

April 19, 2016: More characters are done – and isn’t it typical that the dog is the only not paying attention?

I have to thank my young students for getting the birds painted.  One more left to do!

April 21, 2016: So close to being done!  It’s really coming together. Jamie has finished some more characters and I can start thinking about clear coat soon!

And now the unicorn is complete!

Here is a look at the characters in the curved reading alcove shot as a panorama for better viewing.

And the final mural – note the red balloon. 😉

One thought on “Public Library Mural in Deshler Nebraska”