In a Private Collection 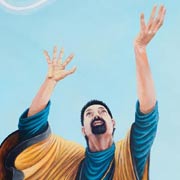 After a few years of practicing magic in the field of Chemistry, Bruce found a successful mix of chemistry and computers to hone his skills as an IT Wizard. This painting commemorates 15 years of his IT business where he works closely with pharmaceutical companies and the FDA.

I painted the background for the 2 journeys that I was painting, together, so they could be hung side-by-side, yet keeping in mind that they would be hung separately as well, so they needed to stand on their own. This painting is the second of the two and I started with sketches that I then transferred to the canvas.

Sometime I project onto the canvas (mostly for the sky or overall placement), other times I will use a drawing or printout to trace an image. This way I can leave it there and remove it when it’s not needed anymore. So, I’ll trace the outline, then paint that white, then I’ll flip the drawing back over and trace the details once the white has dried… as you can see here. Notice that I haven’t added the hair yet because this isn’t the final face and I don’t want a white halo around Bruce’s black hair.

I block in color to define the shape and then start adding detail, highlights and shadows, etc. Always working from back to front. Bruce went to Wayne State so I used their colors for his robe.

Bruce sent me a photo of himself, looking up… and I made Art stand in various poses to find just the right hand position I wanted to use. I wanted it to look like the hands were holding something up in the air… Magically! 🙂  Originally I designed the painting to have a laptop on the table and decided to put that in the air and add a spell book to the table. And I used the same necklace from the first painting.

What’s behind the magic? Bio-hazardous material…. that is why you need to be a professional in this industry! 🙂 I love this book! … and the Faberge Egg (Bruce has a fondness for them). Too bad most of that gets covered up, I paint a lot of stuff into a paintings that is never to be seen again!

Magic is a tricky thing to paint… so I had to perform a bit of magic myself. And the little ones and zeros was just madness, but quite effective as a design element and a great way to get the FDA logo in without screaming, “Hey look at me, I’m the FDA logo!” I also added a little green glow to his hands and face, which you can’t see all that well in the photo. And in the magic, on the number ones in the FDA logo (which you can almost see in the photo) and on the atomic rings, I used inference paint with a green cast… looks very cool on the original!

On the robe, I wrote Bruce’s name on one side and “IT Wizard” on the other, in Yiddish (at least, I HOPE that’s what it says!), he has a connection to Israel. And the dust devil adds to the action.

Bruce has had his IT company for 15 years, so I put 14 finished projects on his path and the 15th, he is in the process of making.

The final steps are to make sure that everything is clean (no more pencil marks, etc) I want to make sure that the backgrounds still line up… lots of little details to give the once over, etc. Then I sign it and give it a coat of varnish…

Journey of an I. T. Wizard